Didn't update yesterday cos I was too busy finishing the cleaning for the inspection.
So, some catch up weather.

Heh, reading the straight figures like that the temperature sounds almost reasonable, doesn't it?
However, consider: when I went to bed last night, it was 29 degrees. When I woke up it had only dropped to 25. The 'low' of the day came around lunchtime, and the 'high' around 3pm...

The inspection went ok. I was working but the cubs were home and texted me when it was finished. I don't know that they were happy to be here on their own but they did it, my wonderful children.
They're going to have to do it again tomorrow though, cos the owner's coming over to check out the stove and fire alarm. (I'd noted for the agent that they needed repair/replacement.) Haven't been able to use the oven for months: everytime it's on there's a strong smell of gas throughout the house. Not good, I'm sure. Stove top and grill are fine, just the oven is worrying.
As for the (mandatory) fire alarm, I tested it a couple of days ago and it didn't work. When the new battery went in, however, the damn thing wouldn't switch off! The unit is ancient and almost certainly needs replacing anyway...

After Mum had had her stroke and I was toiling up and down the Warbie trying to get her unit sorted out, I stopped one Sunday at the local market near her place. I was worn out and depressed, and had rebelliously decided to give myself a small break before continuing to tackle packing up Mum's stuff. It wasn't a restful break as it happened. Mum and I, and frequently the cubs, and Soulsis et al, had been dropping in to this market for more than ten years. Wandering around it that day, knowing that I was never going to be there with my mum again was very hard. I bought myself a little succulent that'd caught my eye. After all, I would be moving in to a new house before the end of the year and it would be nice to have plants again...

I didn't look after the plant though and over the next few months it withered but I couldn't bring myself to throw it out. Not sure why. Anyway, this poor scrap of a thing was transported to the new place, where it sat hidden amongst the stuff piled up on the kitchen table. Everytime I cleaned up I'd find it, and still wouldn't be able to get rid of it so back it went, out of the way, still neglected and unwatered.

Several weeks ago I found it again and this time I decided to give it a good soaking and put it out in the light and see what happened. I reasoned that if it stayed 'dead' then it was dead and I could finally throw it out. However, astonishingly, it started to revive. I wasn't sure at first, I thought the leaves looked a tiny bit plumper but couldn't be certain. So I soaked it again, and again.

It came back. :)
It now lives quite happily on the little freezer under the kitchen window, and I smile everytime I look at it... 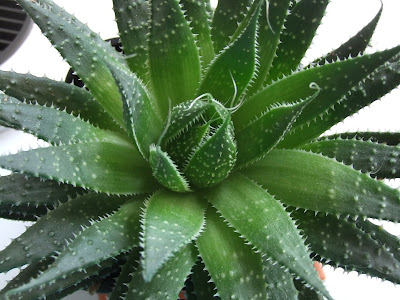